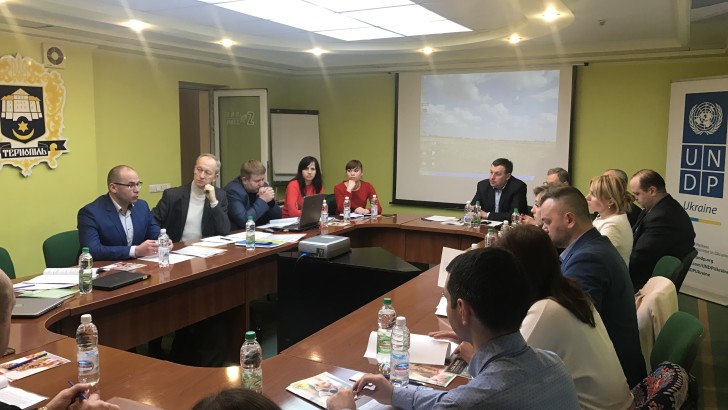 How efficiently to implement the National strategy for assisting in the civil society development at the regional level?


The participants of the Conference-Seminar, held on 16th March, 2018 in Ternopil City as a part of the Project “Public support of implementation of the National strategy for assisting in the civil society development at the regional level” implemented by the NGO “Association for Community Self-Organization Assistance” with the support of the UNO Development Program in Ukraine and Ministry of Foreign Affairs of Denmark, were looking for an answer.

The representatives of the regional administrations, regional councils and heads of HUBs supported by NGOs, public exports and UNO Development Program experts participated in the conference.

Vice Head of the Ternopil Regional Public Administration, Yurii Yuryk, emphasised the importance of this meeting of the government and civil society representatives from Volyn, Zakarpatia, Ivano-Frankivsk, Lviv and Ternopil Regions as all complicated matters should be settled namely in a dialogue.

He pointed out that the priority of the civil society development at the modern stage of national growth comes into sharp focus. That is why, in a climate of decentralisation and association of territorial communities, support by the government for various forms of community self-organisation and public participation is extremely necessary – it makes it possible to bring internal sources of communities for the benefit of people.

And such consulting and advisory agencies operating with the Ternopil Regional Public Administration and Public and Coordination Councils, Council of ATO Participants, Council of Churches and others help the public and government to develop common approaches to solve long-standing problems, lowering “degree” of tension in the society. It should be not forgotten that in Ukraine important decisions were historically made by the community, and the people coming to Maidan is a sign that the community`s opinion was ignored, which was pointed out by the speaker.

The representative of the UNO Development Program in Ukraine, Analytic of Democratic Government, Igor Gotsuliak highlighted that the civil society had been an active entity of the Ukrainian politics for many years. And success of the National Strategy implementation entirely depends on active collaboration of executive authorities, local self-government bodies and public. He suggested that a special attention should be paid to the quality of the acquis ensuring the processes of the civil society growing at all the levels – from state to local.

Head of the Project, Vice Head of the All-Ukrainian Association for Community Self-Organization Assistance, Andrii Krupnyk, refreshed memory that the project performers had created the All-Ukrainian Coalition of Regional Institutes of Civil Society (ICS) for running the public support and for solving the tasks of the National Strategy at the regional level. In general, circa 199 ICSs are included to this mega-coalition nowadays.

The performed monitoring gives grounds to assert that the present quality of performing tasks of the National Strategy for assisting in the civil society development by means of regional Programs and Plans of events complies with the state policy priorities and demands of the Ukrainian society not completely, that is why the National Strategy implementation should be significantly improved.

In particular, the founding procedure and line of authorities of regional Coordination Councils should be clearly states for them not to mix with authorities of Community Councils. The present inconsistencies of the regional Programs of civil society development assistance and Plans of events on implementing the National Strategy should be eliminated.

One should significantly intensify efforts of comprehensive coverage of the National Strategy implementing process and teach active and concerned citizens forms of collaboration with the government and coordinated settlement of local problems.

As a result of a vivid discussion, the participants made common approaches and offers either for the regional government and local civil society institutions or for the national-level institutions.

The conference participants agreed to continue their work so to improve the environment of the civil society development in their regions relying on the common practices of the Coalition of Non-Governmental Organisations within this project.