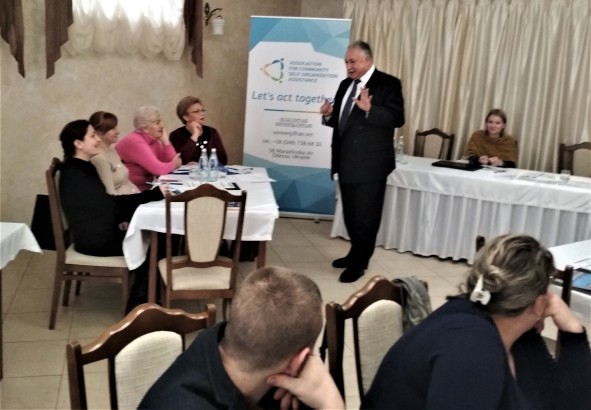 
During November the trainers of the NGO “Association for Community Self-Organization Assistance” visited a number of Odessa region settlements where they conducted two-day workshops.

Three workshops within the frame of the Public Participation School took part with the support of the Democracy Fund of the US Embassy in Ukraine for the public activists and representatives of the city, village and settlement councils.

The workshop in Dobroslav was also attended by Sergiy Reshetov, Assistant Attache of the US Embassy in Ukraine.

The trainers – Andrii Krupnyk and Hanna Trepalyuk assisted in modelling public hearings, general meetings and election campaign in the community.

For more than 12 years these trainers and other experts of the Association have been providing assistance to active people engaged in implementation of social initiatives in 18 regions of Ukraine.

Pubic activists, apartment building co-owners chairmen, deputies and officials  of the local councils and State district administration got to know how the forms of public participation are used, they learned how to write social projects  aimed at solving real problems of their communities and how mobilize dwellers to participate in useful events and initiatives.

As the participants of the workshops told, they are particularly worried with the problems associated with safeguarding interest of the UTC peripheral territories and strategic and economic development of communities based on modern innovations and new opportunities hat open up in the course of the decentralization reform.

The School participants developed concepts of their own future projects – these projects will be finalized and accomplished with the consultative and methodological aid of the Association’s experts.