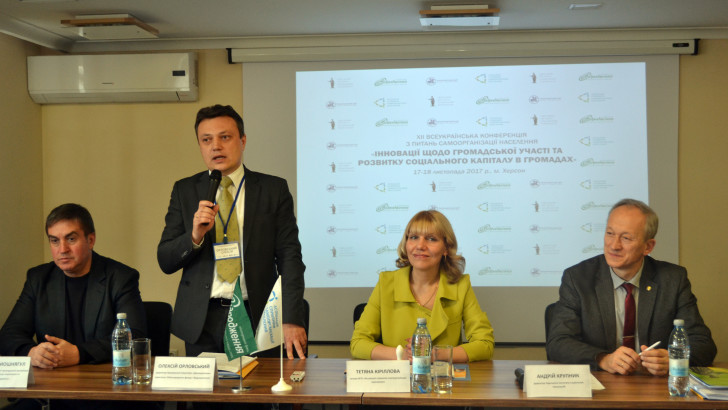 
The XIIth All-Ukrainian Conference on Public Self-Organization was held in Kherson. This year it was devoted to innovations in the public participation and social capital development in communities.

The conference was aimed at discussing aspects of improvement of social relations between members of territorial communities (both united and not united), ICSs that present interests of certain social groups, between them and the bodies and officials of the public authorities with the intention to improve fruitful collaboration between authorities and community which leads to higher mutual trust and solidarity of the Ukrainian society.

“Formation and development of the civil society in Ukraine is closely related with the notion of social capital. These relations are based on trust and mutual assistance. Their targeted formation enables to find a way for harmonization of political, social and economic interests and enhance their implementation at the state level”, Dmytro Butriy, First Deputy of Kherson State Administration pointed out.

“The decentralization reform gave an impetus to the development of openness and transparency of the local self-government. And here we may, on no account, to depart from collaboration with the civil society.  If not the community, who else can see and understand better what is required to be changed.   We, as the Ministry of Social Policy, consider ourselves to be a platform that can unite representatives of the civil society”, Oleksandra Churkina, Deputy Minister of Social Policy, indicated.

“The decentralization reform is based upon trust in maturity and efficiency of the social capital. Plenty of examples can be supplied when territorial communities achieved impressive results whenever they used human resources”, Mykola Myronenko, Chief Advisor of the Local Self-Government Department and Decentralization of the President Executive Office, assured.

“Should the normally established new instruments of the local self-government work out well, the people will acquire a feeling of their involvement in this process and of their opportunity of influence it”, Ina Gaivoronska, Chairman of Rozhyshche State District Administration indicated.

“Under the conditions of reform we felt an opportunity to really influence on the situation in the city. As of March 3, 2014, when a new situation was created in the country, specifically as far as the refugee resettlement was concerned, the civil society became much more active”, Volodymyr Mykolayenko, Chairman of Kherson City Council declared.

The results of the social study of the situation with the social capital in communities of Ukraine were presented at the conference.

The conference also hosted a panel discussion devoted to the social capital development through education and youth policy.

During the second day of the conference its participants have been working at the following issues:

The event was held by Odessa Social Technologies Institute and NGO “Association for Community Self-Organization Assistance” with the support of the International Renaissance Foundation.