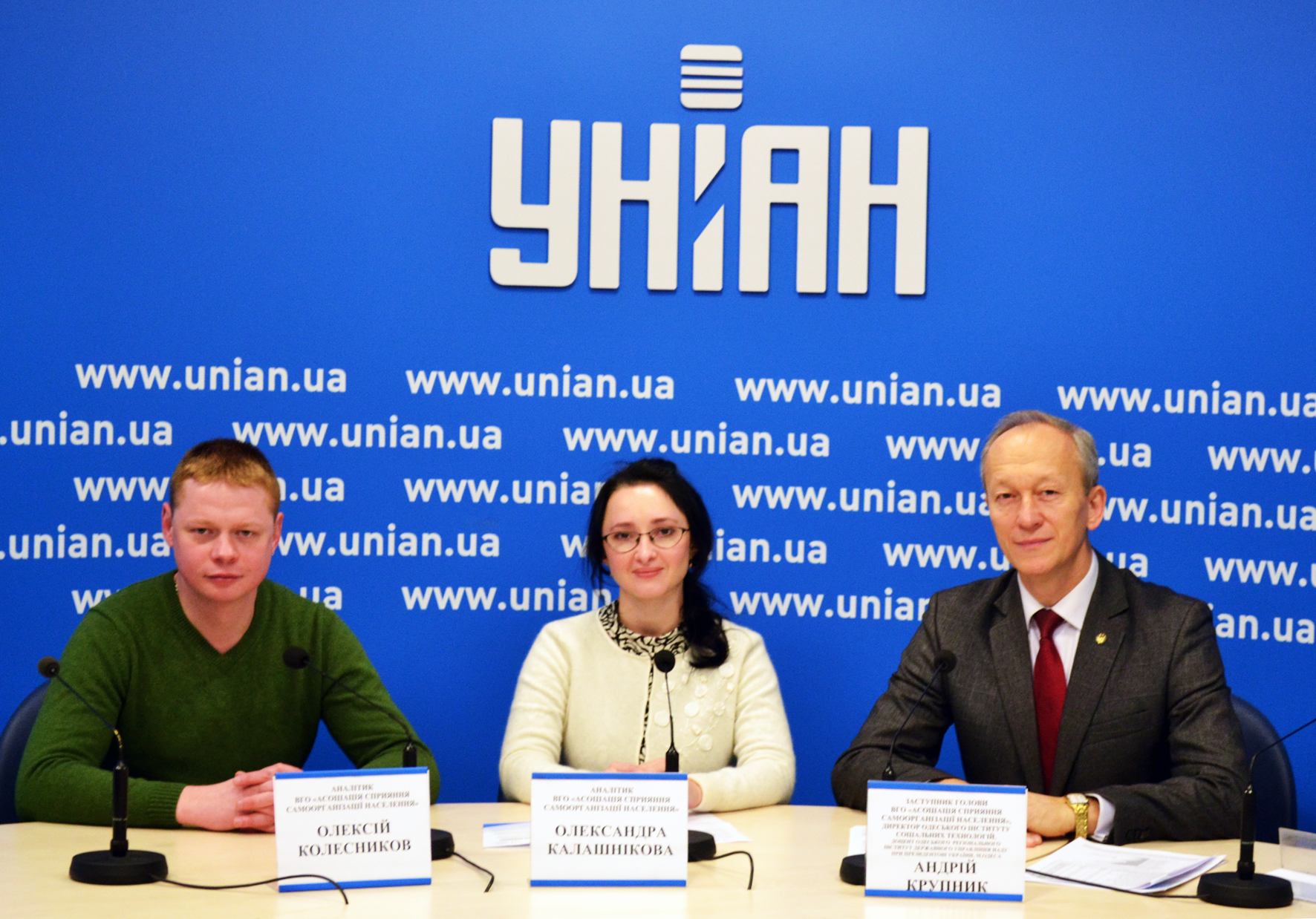 How decentralization steps around Ukraine - view of the participants


What prompted the community to amalgamate? What caused the resistance? How were voluntary

amalgamations? These and many other questions answered analysts Association of self-organization at

a press conference on the research of public participation in local government reform. The event was

held at the UNIAN news agency on November 22.

and Odessa regions. In addition to survey 597 community activists and 69 interviews with government

officials, experts in the survey analyzed the local regulations, on the sites and in the local media.

reform and its implications. Quality and accessibility of social services in their villages and towns

improved after the amalgamation (71.5%); amalgamated TCs budget has increased in several times

(60.4%). &quot;Reform of Local Government in the Mykolaiv region started in our village. The inhabitants of

the village decided to amalgamate with 2 villages. There were problems with registration of the relevant

documents, because we did it first. Prospects here are good, we&#39;ve got 5 million 100 thousand UAH

from the state budget for the development of our amalgamated community, prepared 22 projects to

repair roads and carrying out water mains, repaired 2 kindergartens and schools, &quot;- said one of the

What prompted the community to amalgamation? Interviewed activists believe that the residents

agreed to amalgamate TC because they wanted to get a strong budget (78.7%), hoping to improve social

services (59.6%) and that the reform will make a prosperous community (22 5%). Interviewed

He did resist reform? What caused the resistance?

 local authorities (the reluctance to lose their jobs, because of the confidence that the community in

the future will not have to finance implementation of delegated powers, leading to the destruction of

According to respondents: &quot;I believe that the subsidy – a lump sum which is being spent, and

communities fall apart without state support. Not spelled out who will dispose of mineral resources in

the community and receive from this income. Without this community – also doomed. Because if they will

not dispose of the members of the community, why then create visibility of government. &quot;

of communities and their interests will forget, because of distrust of the central government and the

reforms that it initiates, due to low awareness of reform, fear of the new, depression, misunderstanding

According to respondents: &quot;People from peripheral villages of amalgamated TC (ATCs) are confident that

they will be deprived of them with funding. When properly count the money that will be accumulated in

the budget ATC, it appears that every community that merged lost part of their budget. &quot;

Problems of reform: ignorance of the inhabitants of the prospects of reform, their passivity,

disappointing state of affairs in the country, the high level of distrust of government, lack of awareness

of the reform (48%); legislation falls far short of the rate that it has in the region (22%); the negative

impact of district and regional authorities. Interviewees reported that they felt pressure from the district

authorities who opposed the reform (17%); inconsistency and indecision of the government in

The residents of communities in the reform. 42.4% of the government believe that the local council is

interested and always consult with residents and 46.2% of the public surveyed believe that the local

council only situational involve residents in decision-making or practically does not involve them. Among

the 33.3% of public experts believe that citizens are interested and actively involved in decision-making

by local authorities, and 62.1%, in contrast, argue that citizens do not show interest in local politics. In

addition, the public believes (49.4%), the local council listens to residents in decision-making, while

31.9% say that the local council only occasionally takes into account the opinion of residents in decision

making. The initiators of the association were mostly government officials – village, town and city

of communities surveyed in ATC were cases where associations were the initiators residents (8.6%) and

(35.2%). According to most experts (62.3%) in the association community were taken into account their

historical, natural, ethnic and cultural features of those other communities.

Research was conducted by experts of Odessa Institute of Social Technologies and NGO &quot;Association for